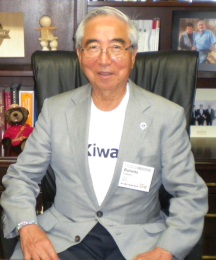 To Kiwanis members
and those who are interested in Kiwanis Clubs

Kiwanis is one of the three major volunteer organizations in the world, along with Rotary and Lions. We have 101 years of history, actively working with “Serving the Children of the World” as our motto. We have more than 7,000 clubs, and around 200,000 members in the world. With youth members such as High School students, we boast having 670,000 members.

There are 33 clubs and 1,900 members in Japan. I aim to make the clubs “fun and meaningful” to all Kiwanians in Japan with following focal points: