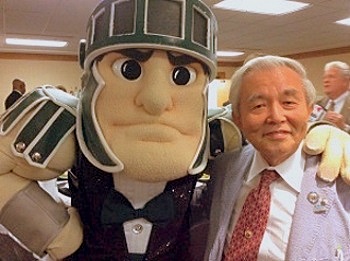 As you know, Kiwanis is a global organization of volunteers to help upbringing of healthy children. We, Kiwanians, are spreading the mission of Kiwanis, enlarging its activities, and using the funds raised for children all over the world.

In June, an annual convention commemorating our centennial celebration was held in Indianapolis, USA, where the headquarters is located. There, Sue Petrisin, the first female president of Kiwanis International was elected. With the motto, “Serving the children of the world”, and the new activity strategy, ”I-PLAN”, we took the first step toward another century on October 1st.

The Japan District celebrated its 50th anniversary last year. Kiwanians from all over the world gathered for the International Convention held in Tokyo-Chiba. We are at such a turning point.

My slogan for the Japan District this year is “Kiwanis Clubs Work with Children of the Community”, where children and Kiwanians work together and share fun. For that purpose, I would like to set the following focal points to support Lieutenant Governors and Club Presidents.

On the nation-wide level, we further promote the Eliminate Project, Kiwanis Doll Project, Prevention of Child Abuse, and Kiwanis One Day. Each Kiwanis Club is encouraged to carry on and develop its unique activities such as Maternity Concert, Show and Tell Presentation Meeting of Volunteer Activities by Children, Messages from Youths, Forum for Foster Parents.

Kiwanis sponsored youth organizations in primary schools, middle schools, high schools and universities are active in many parts of the world. Last year, a “Circle K”, which consists of university students, was established for the first time in Japan with the sponsor of the Kiwanis Club of Ashiya. A “Key Club”, which consists of high school students, is expected to be established this year. We would like to support the activities of younger generation and nurture future leaders.

We are aiming to have more than 2,000 members this administrative year. The more members we have, the more enlarged service activities and impacts we can provide. Let us appeal the fascination of being Kiwanians.

Let us achieve our goals by the Japan District as a whole. “Team Kiwanis!”“