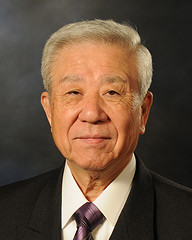 
In 2014, we celebrate the 50th anniversary of the Kiwanis Club of Tokyo. It has been 99 years since Kiwanis International in the United States was founded. In Japan, we also celebrate the age of ninety-nine as “Hakuju”. We will have the first International Convention conducted in “Tokyo-Chiba”, Japan, at Makuhari Messe. The year 2014 will truly be a memorable, milestone year.

Being one of the three major volunteer organizations, Kiwanis holds its motto to “support the children”. Kiwanis International President Gunter Gasser’s slogan is “We Build Bridges for Children to the Future”. In today’s rapidly changing society, our theme to “support the children” has remained unchanged for over a decade. It will continue to be our bright cause.


With this in mind, I would like to hold the following as 2013-14 priority area:


“Tokyo-Chiba Convention” The first International Convention in Japan will be conducted from July 17 to 19, 2014 at Makuhari Messe. Few thousand members and families are expected from both inside and outside of Japan. With the Host Committee at the core, members of the Japan District and volunteers join forces and are determined to make this a success. Kiwanis Japan will surely step up its presence with this.

“Membership Growth and Vitalization of Joyous Kiwanis” Kiwanis International President Gunter Gasser holds membership growth a number one priority. We will aim to have 2,000 members by building clubs in Prefectures where no Kiwanis Clubs are built yet, and building Club Satellites in existing clubs to increase serving hands. Also, we aim to have more interaction among and within clubs to make joyous Kiwanis Clubs even more joyous.

“Promotion of Volunteer Activities such as the ELIMINATE Project” Kiwanis has been supporting children by tackling AIDS and Elimination of Iodine Deficiency Disorder from the world with UNICEF. And now, we are joining forces with UNICEF once again to eliminate maternal and neonatal tetanus (MNT) that deprive 1 life every 9 minutes. We are in its 4th year, and have eliminated MNT in 14 countries such as Ghana. We aim further to eliminate MNT in the remaining 26 countries.
On top of the ELIMINATE Project, 29 clubs in Japan work on diverse service activities such as child abuse prevention and donation of Kiwanis Dolls to hospitalized children. Each club is also conducting its unique activity to suit the needs of the community. Please visit each club’s web site as well to see those activities. We Kiwanians will continue to “support the children”.

I am looking forward to seeing you at Tokyo-Chiba International Convention from July 17 to 19 in Makuhari Messe.